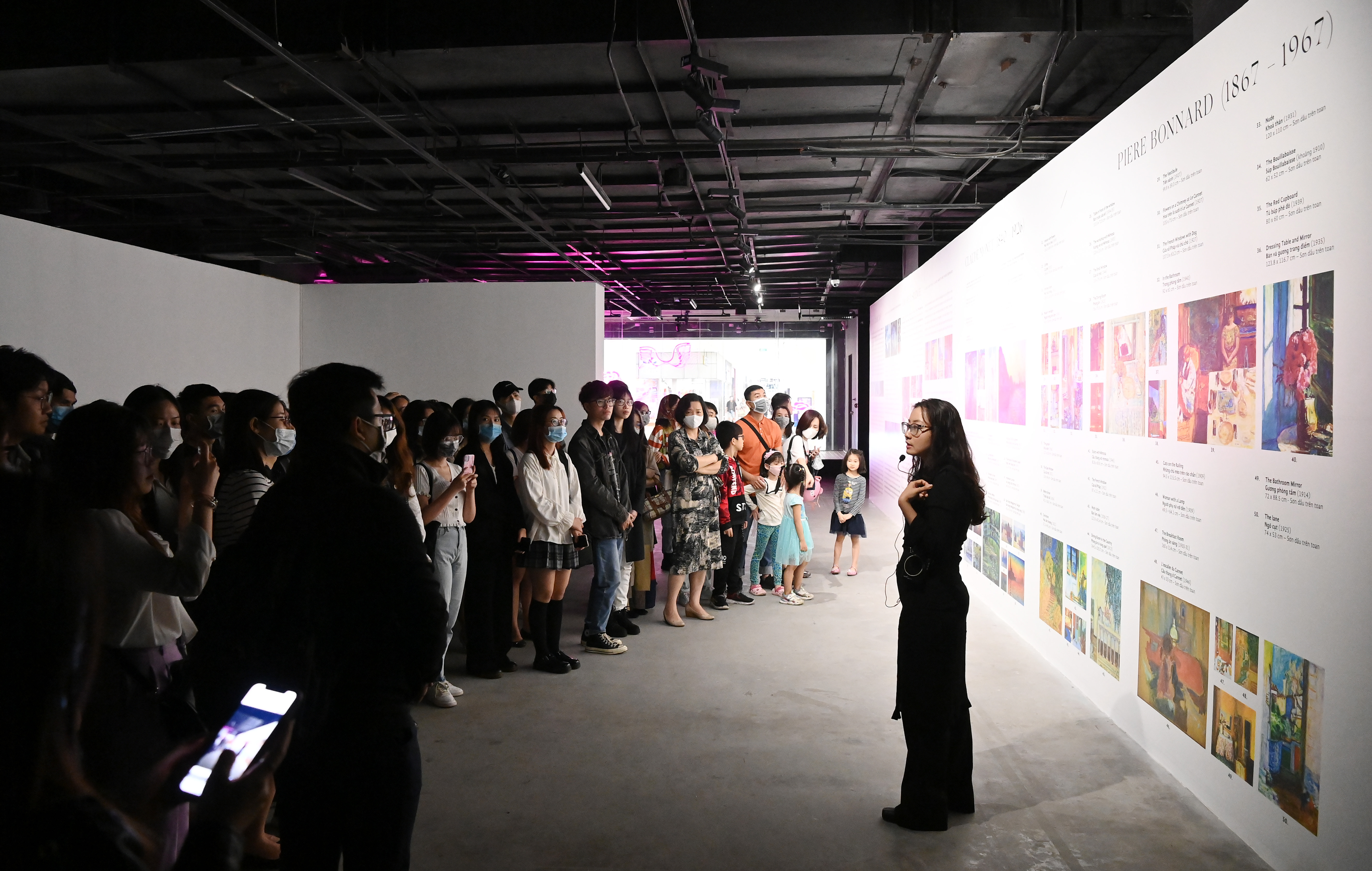 Inspired by Claude Monet’s confession in his letter to a friend, “What keeps my heart awake is colorful silence”, Colorful Silence presents, for the first time to art lovers in Vietnam, 50 works of art by the two world-famous masters Claude Monet and Pierre Bonnard in digital format. Often celebrated with noble titles in modern art history, Claude Monet was a principal painter of Impressionism, and Pierre Bonnard was that of Intimism. The artist duo, together with artist groups such as of Impressionist and Les Nabis, created a vigorous art scene in France in the late 19t- century and early 20th-century. More than any other movement, Impressionism’s affiliation with outdoor painting (also known as en plein air) became an epitome of modernity; its new notions challenged the aesthetics and concepts of earlier art schools. In contrast to the Classical era, Middle Ages or Renaissance – the periods when churches and institutes played essential roles in choosing art subjects and artist’s composing methods – this period highly valued individualism in artists. Artists left the studio space and the limitations of artificial light in the past. They were free to explore new perceptions and feelings about their inner and outer worlds.

The artworks in Colorful Silence rediscover the perspectives of the two artists through the contrast between Claude Monet’s outdoor scenery and Pierre Bonnard’s interior space, inviting the audience to encounter with two worldviews, though they may appear as opposing at first, are in fact the mirrors reflecting human wishes to confront with the essence of oneself and the world. One artist observed with a passion, painting his landscape directly at different times of the day, or transforming the garden into his expansive studio; the other rarely worked outdoors but in his studio, sketching and drawing by memory. However, their realities are both recreated and re-imagined.  As the writer Marcel Proust observes: “So often, in the course of my life, reality had disappointed me because at the instant when my senses perceived it my imagination, which was the only organ that I possessed for the enjoyment of beauty, could not apply itself to it, in virtue of that ineluctable law which ordains that we can only imagine what is absent.” It is impossible not to mention the two muses in the two collections of work, their wives Camille Monet and Marthe de Méligny. While Camille Monet’s death in 1879 at the age of 32 caused Claude Monet to renounce portrait painting completely, the idyllic 50-year romance of Pierre Bonnard and Marthe de Méligny was an endless inspiration and the subject for his works. Indeed, Claude Monet and Pierre Bonnard’s eternal passion for art and persistent creation are rooted in their great love for nature, people, and life. Until the last moments of his life, Claude Monet did not leave the paintbrush despite having to battle with illness. After Marthe's death, Pierre Bonnard continued to draw portraits of her with love and sorrow as if he tried to bring her back to life.

We’d like to invite you to travel back in time to the vivid art world of Claude Monet and Pierre Bonnard to contemplate, imagine and experience the timeless power of art, as the masterpieces still exist and attract millions of people all over the world. And as Claude Monet once stated: “Everyone discusses my art and pretends to understand, as if it were necessary to understand, when it is simply necessary to love.” please come and fall in love.