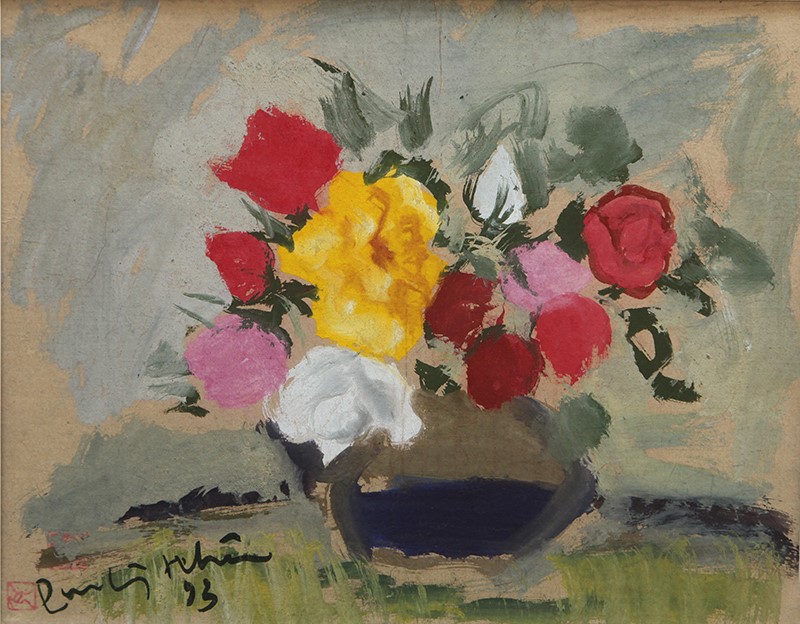 "Stroke" is the first official personal exhibition after 1975 in Hanoi of artist Luu Cong Nhan, organized by VCCA in cooperation with Gallery 39 to bring to the public one of the representatives of realism style in Vietnamese art.

"Stroke" includes more than 50 artworks of the artist selected from over 400 paintings from the hugest collection of paintings owned by collector Nguyen Phuc Huong. The artworks presented in "Strokes"  are from  many theme groups, including famous artworks of female portraits, nudes on various materials such as oil painting, paper , color powder, wax powder, water color, charcoal painting ... Especially, at the exhibition, the public can enjoy one of the most famous paintings “Erasing Illiteracy” of Luu Cong Nhan in the size of 160 x 130cm with oil paintings, painted in 1955.

In the framework of "Stroke" exhibition, painter Le Thiet Cuong - curator of the exhibition will also have a talk show on the art style of “watercolor master” Luu Cong Nhan, his influence to Vietnamese fine arts and the artist's anniversary on August 29th

Graduating from the School of Fine Arts in Viet Bac (1950-1953), Luu Cong Nhan (1931-2007) was one of the best pupils of To Ngoc Van. He was also influenced by the French painter Auguste Renoir (1841 - 1919) with the notion of expressive style, always emphasize the natural beauty, especially the beauty of a woman's body.

The beauty in artworks of Luu Cong Nhan always combines two elements which are the charming and rustic side with luxury and modern side, whether he painted with oil on canvas or watercolor on paper. He contributed to the shaping of Vietnamese modern art on the world map with artworks exhibiting at international exhibition such as Vienne Biennal V (1959), Prague (1960), Berlin (1964), Bucharest (1968, 1960), Paris (1980) ... The artworks of the famous artist Luu Cong Nhan were evaluated by Nguyen Quan Fine Arts critic as "follow the lyrical of Indochinese painting by the optimistic reality of the Resistance War".

Officially opened on June 6th, VCCA has quickly become one of the most attractive art centers of Hanoi. After one month of putting into operation, VCCA has welcomed more than 43,000 visitors. In parallel with the exhibition activities, live painting will be held at the VCCA from August to the end of October 2017, with the participation of many national and international artists, along with many art activities such as workshops, mini-shows ... The program is free entry and is regularly updated on the website and fanpage of the Center./.

Luu Cong Nhan was born on July 5th in 1931 in his father’s hometown, Lau Thuong village, Hac Tri district, Phu Tho province. His mother’s hometown was the neighboring village: the Duy Lau village in the same district. From 1950 to 1954, he studied at the College of Fine Arts of Vietnam, then worked at the Political Directorate (1953-1955). From 1955 to 1965, he took over the Hanoi School of Art and became a lecturer at the Hanoi University of Industrial Fine Arts, painter at Vietnamese Fine Arts Association.